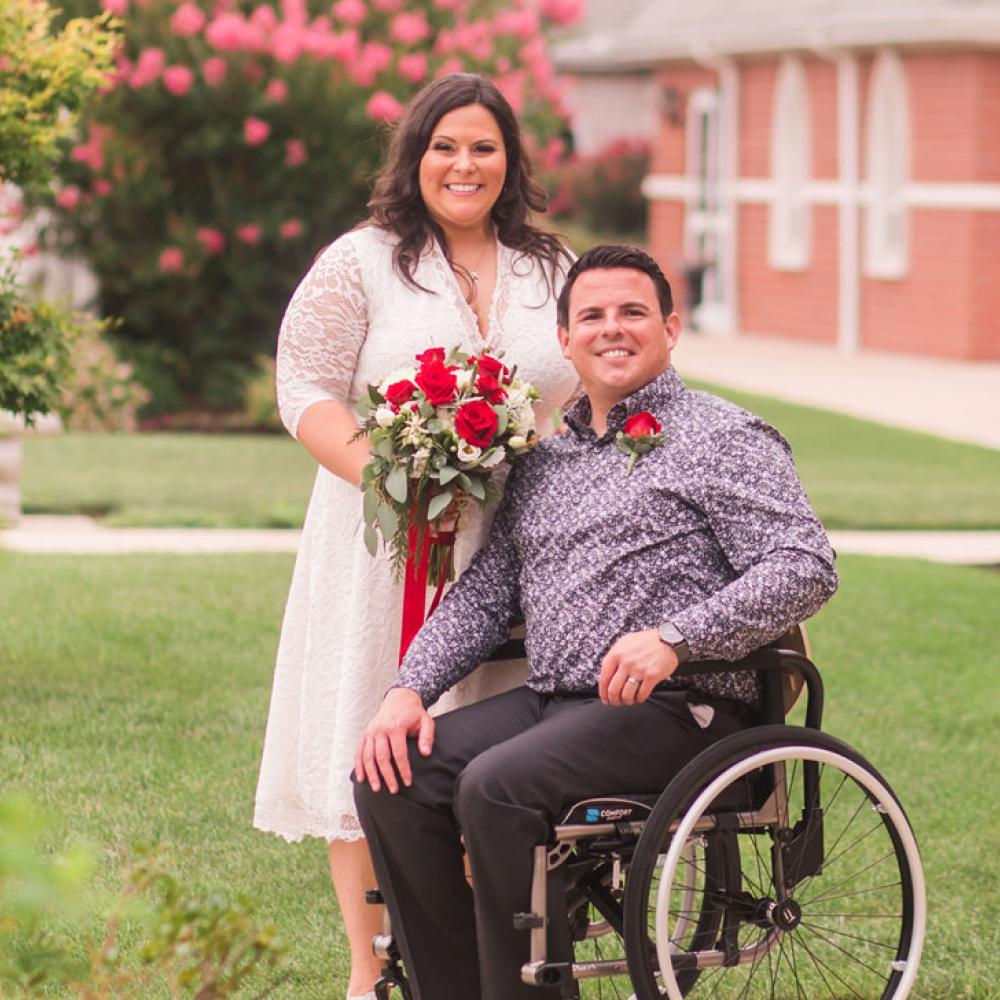 When LGMD is misdiagnosed

Whether the road to an answer is short or long, the LGMD diagnostic odyssey is often riddled with false starts and misdiagnoses. Chris was initially diagnosed with Becker muscular dystrophy, the same condition his brother had. Following a car accident 16 years later, however, doctors uncovered the truth. Chris shares his winding road to diagnosis.*

“I am one of eight kids. I have five sisters and two brothers. My oldest brother Richie, he's 46. He has muscular dystrophy, as well. He's the one that had to go through all the muscle biopsies, all the steroid treatments, and all that stuff to figure out what he had. They thought it was a number of different things. Finally, a doctor diagnosed him with Becker muscular dystrophy. They didn't have the genetic testing back then that they do now. When I started showing symptoms, Richie’s diagnosis was just kind of extended to me, as well.

Chris sums up his life with LGMD in three words:

"I'm not turning my back on my LGMD anymore, like I used to. This is me, my authentic self."

I started to notice things with myself when I was as young as probably fourth or fifth grade. Then, when I was in like seventh or eighth grade, I was diagnosed with Becker muscular dystrophy. That's when my mom told me, ‘Your creatine kinase (CK) levels are high. They suspect that you might have a form of muscular dystrophy like Richie. We want to take you to go see your brother’s doctor.’

I went down, saw a neurologist at the Children's Hospital, and that was it. He said, ‘Yeah. Your CK level is elevated. Your brother has Becker muscular dystrophy, so you should have it as well.’ I was 12. I went 16 years faithfully thinking I had Becker muscular dystrophy. I would go down to see my doctor once a year. They would make me stand up. They would make me run down the hallway. They would pull my arm and stuff and I thought, ‘This isn’t doing anything.’

Through college, I didn't see any specialist, neurologist, anything like that. This whole time, they were building up the human genome, and I didn't even know it was going on. I basically was just living with thinking that I had Becker muscular dystrophy. There's no cure for it and this was how I was going to live my life. Then, when I was 28, I was walking across the street and I was hit by a car.

At the time, I was walking fine. You could probably tell that something was wrong with me, but I was still walking. I was still mobile. I could probably walk like a half mile without assistance. But once I got hit by the car, I was off my feet. I was never able to regain the ability to walk after that and I've been in a wheelchair since then.

"Now I knew the thing that was attacking me. It had a name."

It was at that point where I was like, I’ve got to get back down to the neurologist again. It was 16 years between when I was diagnosed with Becker up until I was hit by the car. At the doctor’s office, the neurologist told me: ‘All you have to do is spit in this tube and we'll tell you in three weeks what you have.’ I was like, ‘All right.’ And she's like, ‘There's no guarantees, because it could come back as unknown still.’ But two weeks later they were like, ‘You have limb–girdle muscular dystrophy, type 2D.’

Now I knew the thing that was attacking me. It had a name. Not only did I know what it was, I became familiar with it. I knew where it was coming from in my muscle. All that little detail, it gives you hope. It gives you the ability to know what is happening. I would call it empowering. It's like getting an upper hand in it all, because instead of going blindly at it, you know what you're fighting against.”

Once genetic testing confirmed his LGMD2D diagnosis, Chris’ girlfriend-at-the-time, Joy, encouraged him to get involved with advocacy efforts at the Muscular Dystrophy Association. Chris is now an MDA Ambassador, a newlywed, and a soon-to-be father!