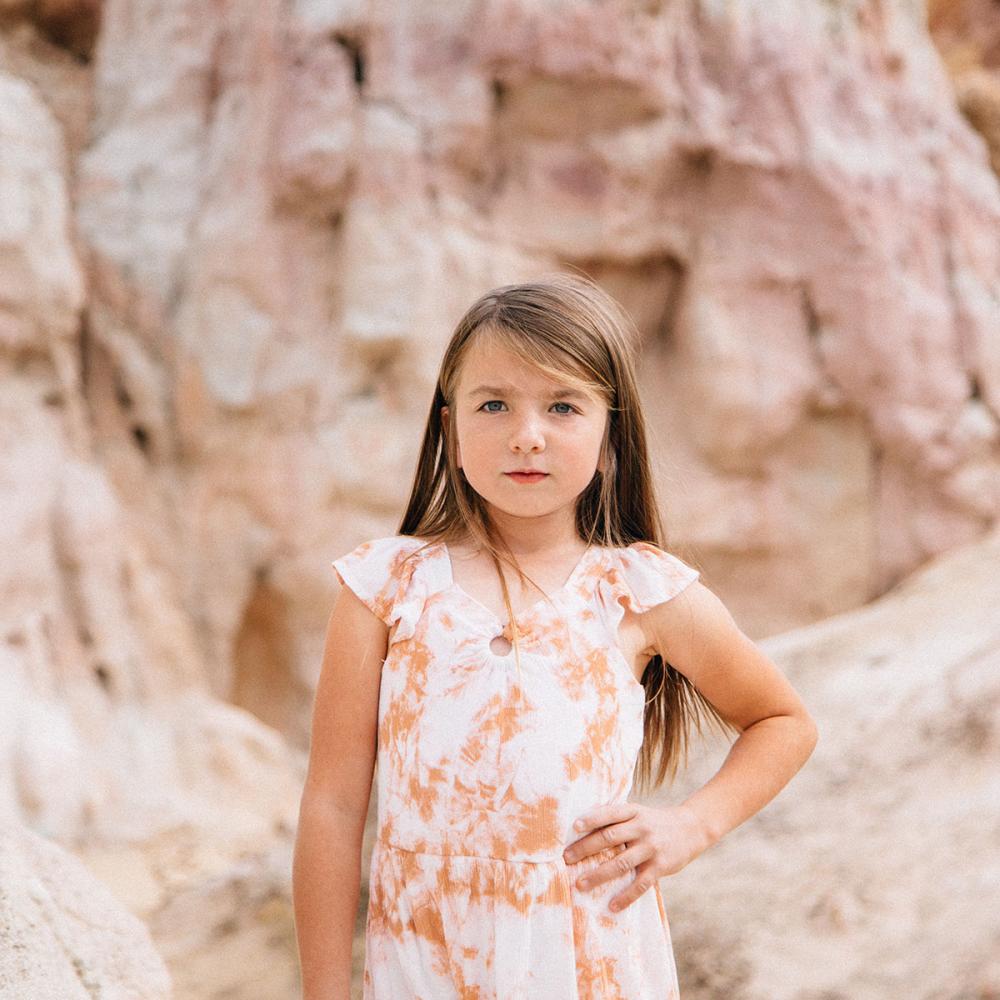 For years, this close-knit military family struggled to decipher what was making their daughter suffer from debilitating leg pain and an odd, tiptoeing walk. But then a friend—a nurse who worked in a children's hospital—encouraged them to dig deeper. Kendall's mom, Keesha, shares their story about limb-girdle muscular dystrophy.

“We have three kids, and I'm pregnant with my fourth. Kendall is our oldest. She'll be nine in October. We're a military family, so we move a lot. Kendall was born in Hawaii, and ever since she was two, I've told every doctor we've seen that something was going on with her.

When we lived in Germany, Kendall couldn't go on family walks with us. She couldn't walk even a couple of blocks. We knew something was wrong, and everywhere we went, we saw different doctors. And every year it got worse.

She got her MRIs done, but doctors weren't looking for muscular dystrophy. They thought she had a fracture, or something wrong with her tendons. She probably saw 10 or 15 pediatricians and specialists. We tracked everything except her CK [creatine kinase] and her blood work. It was crazy. We tried for seven years but hit a wall everywhere we went.

"Knowing my daughter has LGMD definitely puts things into perspective. We don't sweat the small stuff."

When we moved to Colorado, Kendall couldn’t even go up stairs. I started demanding answers from our doctor, who said, ‘Maybe she's a complainer. Maybe she doesn't like exercise.’

Finally, I had a friend, a nurse at a children's hospital, who suspected muscular dystrophy. She said, ‘I don't want to scare you, but you need to get answers.’ So I called our primary-care physician, who told me: ‘Girls can't get muscular dystrophy.’

But I demanded the bloodwork, and they finally did it, and after that we got the call. In my heart, I already knew. I’d put it all together. It was February when my husband, Matthew, and I did our own genetic testing, and it came back that we are both carriers and that Kendall has limbgirdle muscular dystrophy, type 2E.

It was a relief to finally know and put a name to it, but it was a huge heartbreak, too. We’d been trying to figure it out for so long. I felt sad, angry, and hurt—and guilty, too, for things we had made Kendall do.

The doctors and neurologists tried to ease our minds that we probably didn't progress it, but we used to go on six- or seven-mile bike rides as a family. We walked on the beach all the time. Back then, every doctor told us: ‘Push her. She's just being lazy.’ But she couldn’t. She’d be in tears. Matthew would have to carry her home on his shoulders.

Now, Kendall knows she has a muscle problem, but she doesn't know it's a debilitating disease. We try to tell her, ‘Slow down; you're going to make it worse,’ but she pushes herself. She's strong. She's a tomboy and could have been a really great athlete. She loves art—drawing, crocheting, painting, playing with beads—so anytime she's outdone herself playing basketball, we have her come in and sit down so she can prop her legs up and crochet.

I’ve apologized to her: ‘I know now that you really couldn't do it—I should’ve never tried to make you.’ I guess we’ve managed pretty well. If I'm having a bad day, Matthew knows to pick up the slack. We can't both be a puddle on the floor. I’m due in October, and because we’re both carriers, we’ll obviously be testing the new baby. There's a chance the baby could have LGMD, too.

It's shocking to me how little education there is about LGMD, even for doctors. They don't know about it. And ours was a pediatrician! Too many of them don’t know what to look for. For us, though, we’re moving forward. There's no turning back or giving up. We're in it for the long haul.“

With a houseful of children and a new baby on the way, Keesha and Matthew are feeling relief to have received the information they needed about their eldest daughter. As for Kendall? She can usually be found creating something special for her favorite school subject: art.