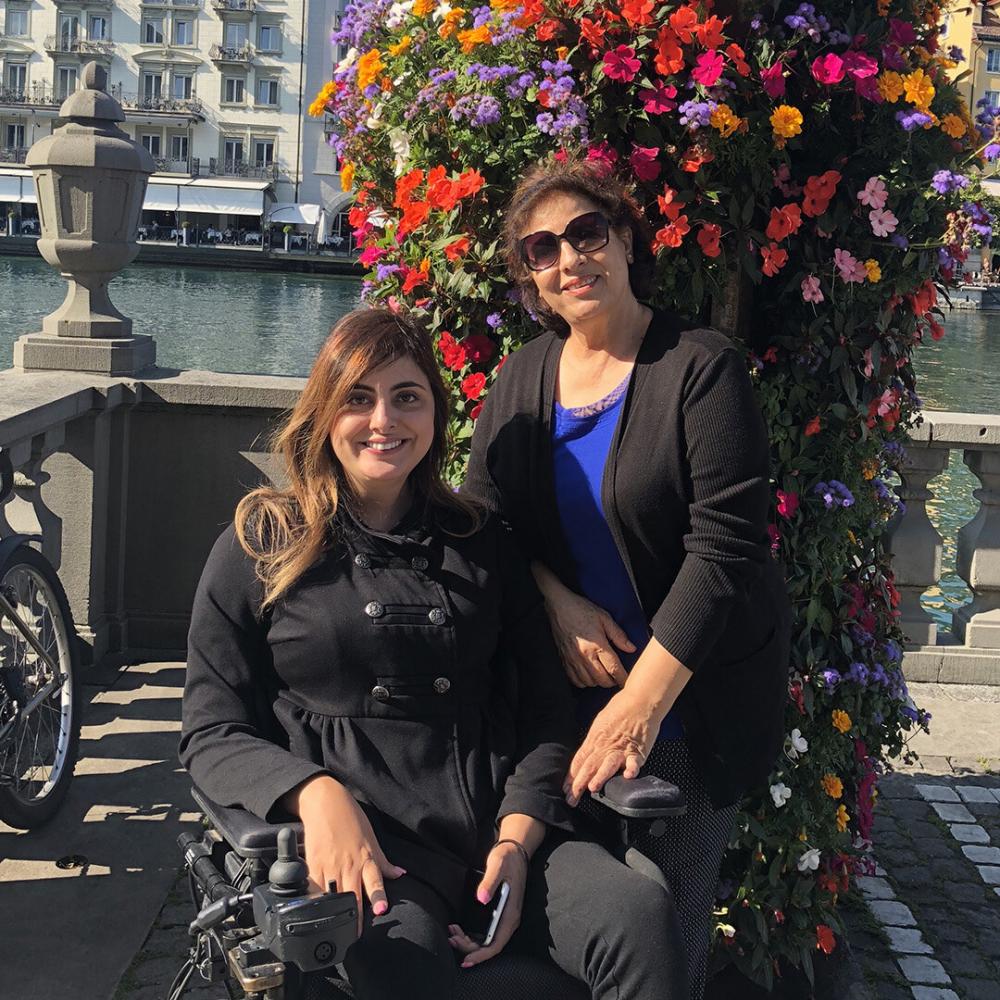 While current treatment options for limb-girdle muscular dystrophy are focused on symptom management, those with LGMD manage daily life and the physical implications of their disease in a variety of ways. Rania shares how her support team helps her navigate health issues, a social life and a successful career in financial data analytics.*

“My LGMD has progressed over the years. I’ve been in a wheelchair since I lost my ability to walk at 15. I’ve noticed that I’m getting weaker over time, especially around mobility in my arms. That part is hard. There are times where I just feel more tired, regardless if I get eight hours of sleep or not. It’s weird because I’ll get pockets of extreme fatigue after work, when nothing’s really changed.

I live with my parents. I never felt the urge to leave because they give me my space. I still go out with friends, so I don’t feel like I’m missing out in that aspect. Honestly, my parents are a blessing. There’s also the aspect that I’m terrified to be out on my own because I am 100 percent dependent on other people. And since I am working, I don’t qualify for a lot of the social programs. I wouldn’t be able to afford having my own care manager or hiring a caregiver.

Three words describe Rania’s feelings about LGMD: first in childhood, then the teen years, and, finally, in adulthood.

“My teenage years were definitely the hardest because that’s when I felt left out. I didn’t look at the severity of the disease. Instead, I looked at how it was holding me back from being ‘normal.’”

That means I really have to get comfortable asking people for help. Going to or leaving work—my dad would usually drive me until I got my van. We had a van modified so that I can drive it on my own. That was huge as far as gaining independence. Now I’m able to drive from my house to work, and that’s nice because then I can actually go out to eat with my coworkers.

At work, if I am going from building to building, I ask a coworker to come with me to open doors. At my previous job, I did ask for a push button door and they kind of brushed it off like, ‘Oh, it’s not really required by the Americans with Disabilities Act (ADA).’ When I started my current job six years ago, I noticed that the very first door I went through had a push button door. And I realized the building that I would work in also had a push button. I was really, really impressed because I’d found a new form of independence. Right? In fact, when the company was preparing to build a new facility, they called me in to a meeting because they wanted ADA feedback from somebody actually in a wheelchair. They included disability at the forefront of the conversation rather than as an afterthought.

I also find support in a Facebook group exclusively for adults over 18 with muscular dystrophy. It’s interesting to see the wide spectrum within the muscular dystrophy community. I’ve made friends, one in particular who lives only a few hours away. She’ll come up and we’ll meet. It’s nice to connect with her. When I was getting my van set up, I actually connected with someone out in California who was going through the same process. She was just further ahead than I was. It was so neat going through it together and talking about how we were feeling. I know plenty of people that drive, but she was literally the only one that I knew of going through the identical process that I was going through.

"Life gets better, though. You learn to grow and to manage your challenges. You get better at problem solving."

Life gets better. You learn to grow and to manage your challenges. You get better at problem solving. I feel like being in a wheelchair, you gain valuable life skills that maybe we learn a lot earlier on than people who don’t go through what we experience. I’m working. I’ve gone to school. I have a good job. I go out. I’ve done just as much as my siblings who aren’t diagnosed with LGMD.”

Rania, 33, transformed her MBA into a successful career as a financial analyst. When Rania was 10, doctors diagnosed her with LGMD2E. They diagnosed her brother with the same condition a few years later. Three of her cousins also have LGMD2E. When Rania is not working, she enjoys spending time with her family!